Blister inspection in the X-ray flash

We have turned the top-down inspector into a sideways inspector for a customer in order to achieve more detection accuracy when examining several layers of blister strips packed in tubular foils at the same time: a clever infeed mechanism gently turns them before the pulsed X-raying. In this way the HEUFT eXaminer II XB can check from a better perspective whether they have been completely, correctly, flush arranged and repacked without any faults – and in addition also identify "biting marks" in the blisters themselves as well as crushed tablets, pills or capsules in their cavities.

However the slimline HEUFT system is not only the first choice for such special cases. Its standard version is also ideally suited for a wide range of applications for the one hundred percent inspection of blisters in pharmaceutical lines. With further developed pulsed X-rays for even more detection and failure reliability it makes visible exactly that which remains hidden from the human eye and conventional camera technology:

The HEUFT eXaminer II XB can also detect and reject secondary packaging in which for example one of the strips or the leaflet is missing when checking the completeness, alignment and integrity of several blisters after they have been packed in tubular bags or alternatively only after the cartoner.

In addition contaminants which threaten the safety of the medicine are detected gently and precisely: depending on the density of the respective preparation even steel foreign objects which are only 0.3 mm in size can be identified in the product. Just as with the detection of empty or only partially filled cavities as well as damaged tablets, pills and capsules, this works best directly behind the blister machine – during the top-down X-ray inspection of individual strips before they are assembled and further packaged.

Whether before or after the cartoner, whether for the full-coverage inspection of individual or several blister strips at once: the HEUFTeXaminer II XB fits into even the smallest installation gap in order to identify critical faults during the packaging process. And this is independent of the material and composition of the individual packages and medicines.

It does not need a permanently activated X-ray beam to do this! Instead, only millisecond X-ray flashes are emitted at the exact moment the product passes the detection. With full detection accuracy, the radiation of this pulsed X-ray inspection is so low that even sensitive preparations with active pharmaceutical ingredients (API) can usually be X-rayed without hesitation.

The highly automated HEUFT eXaminer II XB fulfils basic FDA, GMP, GAMP5 and 21 CFR Part 11 requirements with an online connection for the real-time transfer, processing and archiving of batch and production data, test container and Knapp test logs, audit trail documentation and remote maintenance. It is designed as a hygiene-optimized linear traveller and realizes a non-contact inspection in the smallest of spaces.

Whether in front of or behind the cartoner, whether top-down as standard or with very special belt mechanics for even better perspectives in special cases: HEUFT integrates the further developed compact system into pharmaceutical lines in an uncomplicated manner with the right know-how in line planning – not only for the one hundred percent quality inspection of blister strips!

Top-down for an optimal side view 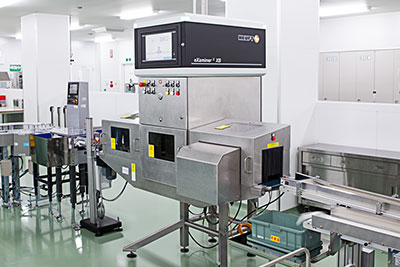 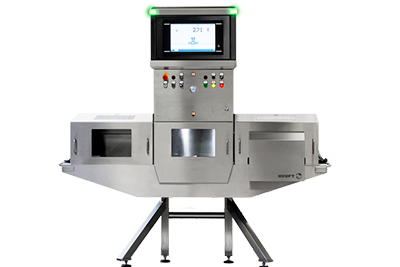 More reliability in the X-ray based detection of foreign bodies 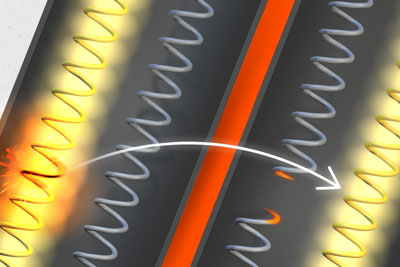